Hey guys so I followed the instructions exactly (or so I thought), but I’m getting this weird diff form. I know my stag-beetle.jpg and joseph-roulin.jpg are out of order for some reason and that can be a quick fix, but I mean the diff it sent me is so long and it seems to say the same thing over and over again -0,0, +1,3. It’s giving me this error for every branch and I just have no idea. 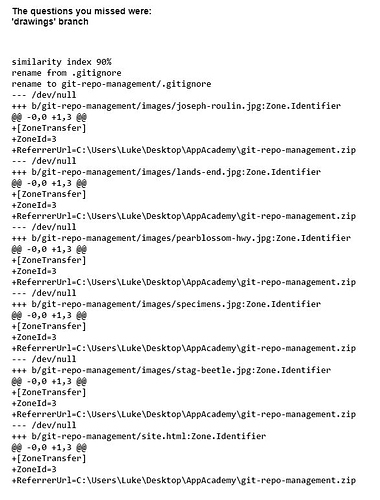 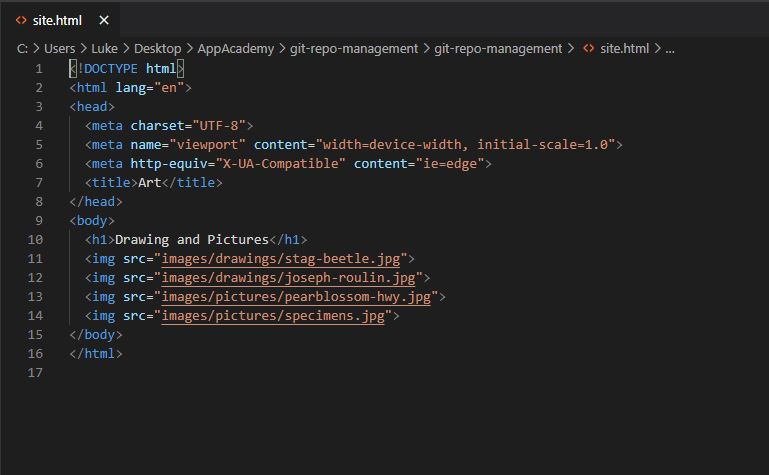 This is the master code.

and sorry this is the master diff it sent me, but like I said they all look pretty much the same to me. 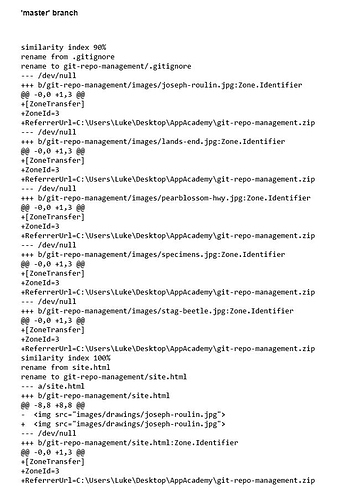 Hi, @LukeB88! Welcome to the community!

Did you happen to see this similar thread:

This is a Windows Subsystem for Linux (WSL) thing. Information My suggestion would be to simply do the assessment natively from Windows. Using PowerShell or Windows Terminal. Have all your files stored in your Windows ~/Documents/git-repo-management folder and install the Git for Windows to use git from your Windows command line.

Sadly, this appears to be a Windows Subsystem for Linux thing that happens on some students machines. Any chance the guidance in that thread can point you in the right direction?

Hey thank you I’ll give it a shot.

I’m getting this warning after doing "git add . "

warning: LF will be replaced by CRLF in git-repo-management/site.html.
The file will have its original line endings in your working directory

Is this okay? Thanks

That should be fine. That’s just a typical Git warning when working on Windows.

I passed! You’re the man. Should I be worried about WSL compatibility in the future? I do have linux fedora booted on a external ssd, but linux just doesn’t seem to like running on my pc. I don’t know if it’s my nvidia graphics or what, but I’ve tried just about everything and almost every distro. Thanks again